The boys received these Straws and Connectors Kit

for Christmas from Nana and Papa and they really are a lot of fun! They still need helping building an actually shape, but they can easily connect them by themselves.

After daddy built the rocket ship in the picture, Ez insisted on some wings for himself. Noah likes to connect them to make letters and numbers.

Sorry Noah I have no idea why you didn’t make any of the photos.

Yes that is an affiliate link, doesn’t hurt to try make a couple of bucks here does it?

I find it really interesting how kids handle their dreams and nightmares differently. We have entered that stage of nightmares and screaming wake ups. Actually Ezra started months ago during the summer. He would wake up thinking there was someone in the room.

So Stephanie found an idea from another mom, that we asked Ezra to take that dream, and give it to us. We would hold out our hands, then take the dream out of the room to “throw it away”. That really helped Ezra. He would generally calm down, and be done with it.

Last night was Noah’s first screaming nightmare. An alligator in bed. I think he has been watching too much of the classic Disney film “The Rescuers” featuring the bad characters pet aligator henchmen. So I tried the same thing. I stood there with my hands open and asked him to give me his dream. He said “Where?, How Daddy?”. I said from your mind, close your eyes and pretend to hand it to me. He does. Then as Im holding my hands closed, he freaks out “DADDY! YOU ARE DRIPPING IT ON MY BED!”.

Just so funny how one boy accepts the idea and thinks its great, while the other questions its logic, and if it will even work.

Ohh what did work you ask? I asked noah to describe to me the dream. I drew it. Black and white, with a lime green alligator in his bed. I asked him to crumple it up, He refused to even touch the paper. So I took it and made a ball, took it to the fire place, and burned it. He really enjoyed seeing the paper writher away to ashes, and I hope it helps future nightmares. 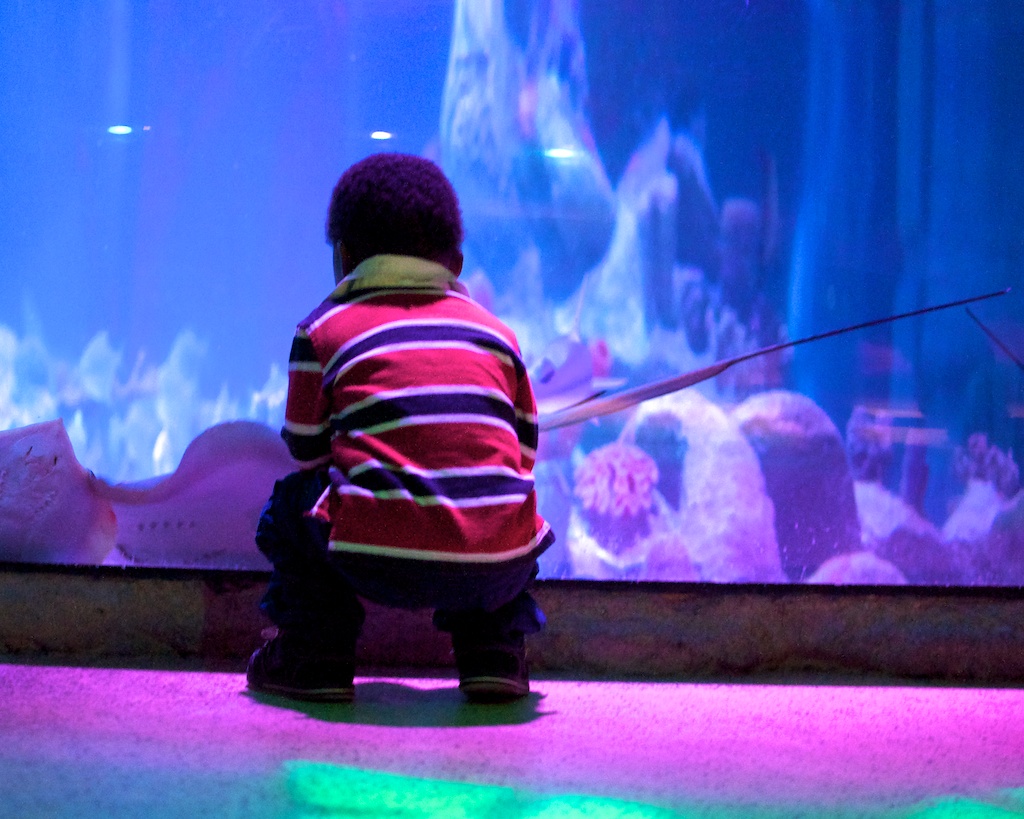 Took the boys to the Sea Life aquarium. They really loved it and loved seeing all the fish. Lots to see and do, they bounced around all over from display to display.

Our entire weekend next week suddenly opened up, so we are considering one of the three day potty training methods. The one that I read reported that 22 months is the best age to potty train, and the boys will be 23 months next week. I am wanting input from parents, but not on methodology or the correct age. (okay you can offer it if you want I won’t turn down free advise.)

But what I really want is a pro and con list of a potty trained child. I think a lot of people spend a lot of time thinking about how to potty train, but I want to think of the after the potty training consequences and benefits.

If potty training next weekend doesn’t work out, we will think about it again sometime after the craziness of the holidays.

We are working on the boys saying excuse me after they burp. When they burp we simply prompt them to say “excuse me.” Ezra says something that sorta sounds like excuse me. Noah on the other hand pats his chest and says what clearly sounds like “mommy.” Guess he is already blaming me? 😉


My little guys are not wanting to be little anymore. They try so hard to do everything on their own. The new desire for independence is bittersweet. Hooray I don’t have to do everything for them, but oh is it so hard to wait and watch them do the little things for themselves! It can be a little bit frustrating. They don’t have the words to express what they want and the tantrums can be often and looooong. I am also struggle with finding the balance between pushing them to grow-up too fast and letting them grow-up at their speed without getting in the way. I often think they are not capable of doing something, but it turns out they are.

They currently would prefer to drink out of regular cups, no sippy cups please! I decided they can have regular cups at the table. They decided that they should start sticking their forks and then their food into the cups. Took the cups away after the appropriate warnings and full fledged tantrums erupted and no dinner was eaten. 🙁 They do a great job of drinking out of the cups. I am hoping once the novelty has worn off it will go smoother.

As noted in a previous post Noah is starting to have opinions about what he wears. Last night he was screaming for 15 minutes. Turns out he wanted to wear a red shirt instead of the green shirt daddy put on him. How did we figure that one out? I started un-packing their suitcase and he found a red shirt and held it up to me. I think we will work on re-organizing their clothes this weekend so they can find what they want more easily.

Thinking about potty training. Yea I am shocked about that too! I was thinking I had a year until I seriously considered it, but the boys are letting me know when they have pooped. Noah flat out refuses to go sitting down. Every time on the trip when he had to go, he would arch his back, scream, and try to get out of his seat. We would stop and he would go with in 5 minutes. He KNOWS when he has to go. Ezra I am not so sure about, he will let me know after the fact that he needs a diaper change. He also didn’t go in his car seat once and waited until we stopped, not sure if it was a coincidence or he just wasn’t as vocal. Currently I am just working on the words, because if they can’t use the words to tell me it will be much more difficult. I read an article recently about potty training boot-camp style at two years, I figured I would do it in January (after all the holiday craziness), but I am trying to feel it out and if the boys are ready sooner I will be doing it sooner.

I am continually amazed at how fast they grow-up!

Remember all the way back in October of 2008 when Matt excitedly bought some hot wheels? He couldn’t wait to play with them with our kids. At the time we were still anxiously awaiting a referral and would wait 4 more months.

Well almost 2 years later he finally broke out those hot wheels. The boys were super excited, but Ezra was beside himself with excitement. I wish we would have thought to get the camera out sooner. He just ran around screaming and squealing with delight.

Here is a video after he calmed down:

excited for hot wheels from Stephanie Adams on Vimeo.

MVI 8493 from Stephanie Adams on Vimeo.

Noah was a teething, clingy boy so you just hear him start to whine at the end of the second video. Here is a pic of how he looked:

The boys’ received a membership to Phoenix Children’s Museum for Christmas. (I had asked for memberships places since we have lots of toys already.) We waited until now to actual purchase, so the boys could enjoy it a little more and enjoy it they did. They had lots of fun and kept us very busy!  It will be a great place to go and play once the weather is hot and we can no longer play outside for hours on end.

Thanks Nana and Papa!

Busy Week this week with Nana & Papa in town from colorado. Lots of activities and pictures!

Remember back in January when the boys were in that messy child contest and you all voted so wonderfully for my guys?  Well Noah won and we are now sporting two wonderful Totrags full coverage bibs.  Christine was even so thoughtful in making them in the boys’ colors. We took them for a spin today and so far our clothes are clean, well clean from food, dirt and mud not so much.

The boys hair was all sorts of out of control, growing every which way, and several different lengths.  On New Year’s Eve we decided to take them for their first haircuts.  It went fairly well, we went to CNC Barbershop and Cedric was super nice and did a great job with the boys.  Ez’s hair is shorter than I wanted but it was the only way he could even it out (on the plus side Noah can’t pull it anymore).  Noah’s turned out great and is easier to comb out. That’s right they are both finalist!  So please hope over to totrags and vote for Noah or Ezra!  We love our totrag bibs and could always use more bibs.

And if your interested hop on over to totrags and purchase some of their great products yourself. And the 7 minutes of cake mayhem. Some pretty entertaining moments in here .

The boys and their first cake This is what Noah currently thinks of the notion of crawling.

Since Ezra has been crawling for weeks, I thought we would have a little fun with Noah’s lack of desire to crawl.  Our first ever poll!
[polldaddy poll=2082021]