So we went to Imperial Beach in early June as we usually try to every year. Stayed in a great condo on the beach, visited Lego land and enjoyed a very quiet tim on the beach. 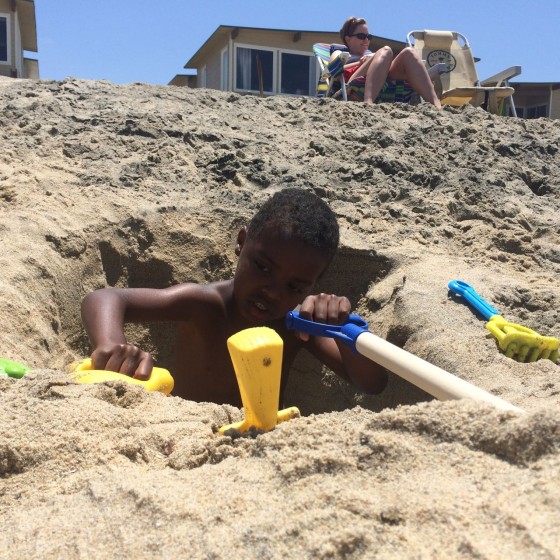 We love hitting the beach each summer. We drove to Imperial Beach CA (South of San Diego) for some fun in the sun and playing around the cooler weather at some of our favorite spots.

When we went to Imperial Beach this summer I decided to look at our memberships to see what we could do for free or low cost while on vacation. If you have a Desert Botanical Gardens membership you can vist the San Diego Botanic Gardens for free. If you have small children or just love enjoying nature I highly recommend these botanic gardens. They had two different kids gardens. One was more appropriate for toddlers and the other was fun for kids of all ages (even Matt.) There was a miniature railroad to view, dirt to dig, a treehouse to climb, a music garden, and lots of green (yea I live in the desert so I get excited about green.)

We spent a whole week at Imperial Beach this August and it was wonderful. Not to say we didn’t have our bad moments, a whole week of some serious time together isn’t easy, but it was fun and relaxing! We took tons of photos so I think I’ll do several posts. We mostly chilled at the beach and played on the playground downstairs from our apartment. We did use our botanical garden membership to get free reciprocal admission into two other gardens in the San Diego area (if you have memberships to places check out reciprocal admissions before you go on vacation, great way to have cheap fun!) I made freezer meals before we left and took my crockpot on vacation with us, sorry no vacation for her! We could play all day and come home to a nice home cooked meal. 🙂

There is nothing like enjoying the sunset on the beach, while watching your boys dance, wrestle, and run around like crazy. No toys necessary!

Back in April Papa John went to Heaven. The boys and I travelled back to Oklahoma with Gamma and Papa to be with family. Even thought it was under sad circumstance we still had a nice time with family.

Here is an album of a few photos of my Papa.

We had a blast at the beach last week. We hope to make this a yearly trip. I love the beach and I’m so glad the boys did too! (or giant sandbox as they call it) We rented a small cottage with a very nice view. It was so nice having our own space (so we didn’t feel so bad about being loud) and being able to cook our own food (so much cheaper than restaurants).

We went to the beach every morning, napped (okay poor Matt worked!), and then went back to the beach. There was a train crossing a block up the road from the cottage and the boys had to go see the “thomas crossing” every day. The weather was divine, never above 72°, it was a little gloomy in the mornings, but the sun would come out in the afternoons. We loved being able to walk wherever we wanted without feeling like we were going to melt. The last night there we took a super long walk, walked out on the longest wooden pier in the US, then walked around downtown Oceanside. For all that walking the boys were rewarded with pizza and ice cream.

The first evening there we went straight down to the beach near our cottage. The tide was coming in and the coast line was rocky right there. The boys went out in the water with us right away, but Noah lost his balance in a wave and was done with the water. We were all playing in the sand up high by the rocks and told Noah the water couldn’t come get him. The waves were coming nowhere near us, so we all relaxed and had some fun sand play. Imagine our surprise (and poor Noah’s terror) when a large wave came up and knocked us all over and started taking our stuff out to sea. Poor Noah wanted nothing to do with the ocean after that and I thought our trip was ruined. The next day though we found a little play beach with no rocks and eventually he warmed up to the water and ended up loving it. 🙂

On the way to Oceanside you drive through the sand dunes. I pointed them out to the boys and Ezra demanded we go play. He just couldn’t understand why we wouldn’t stop to play in this sand. I explained it would be more fun at the beach. The boy loved the giant sandbox near the water and requested to go to it constantly. “Go play big sandbox”

You can see more photos here, and also click on the first photo in this post to scroll through and read descriptions.

Some video of the fun:

Untitled from matt adams on Vimeo.